The voice is like a musical instrument. As children we learn to use it by imitation.

When it comes to acquiring a second language things are a little more complicated: habits have already been established. So conscious effort can help to change them.

To understand how to create unfamiliar sounds, it can help to begin by playing with your own native language. The sounds that we make are broadly speaking based on three primary factors:

Put your finger to your adam’s apple and say the words this and that. You should notice a slight vibration when you say the word that that. That is a voiced sound whereas this is unvoiced.

Where the sound is articulated

Say the word fit. You will notice that you front teeth rest on your lower lip. This an articulation: a way of moderating the airstream.

In the case of fit the articulation is called labio-dental.

If you say the word sin your tongue will rest on the roof of your mouth. This is an aveolar sound. There are many different places in the mouth where we can use the tongue to articulate the airstream. Each will produce a different noise.

How the sound comes out

Say the word pit and there will be a build up of air which is released. This is a stop sound also known as a plosive.

Say the word think and your tongue will vibrate between your teeth. This is a fricative sound, a dental fricative.

Say the word ship and your tongue will vibrate on the roof of your mouth. This is also a fricative, but it’s a palato-alveolar fricative.

Say the word rope and your tongue will go close to your palate, close enough to change the sound but not enough to cause a vibration. This is an approximant.

Now you’re used to playing around with the positions, you can work on making new sounds.

The first difference between the French R and the English R is that the French R is always distinctly pronounced. (Whereas for example in an English word like farm there is no distinctly discernible r sound).

The French R is an uvular fricative. We know that because it is a fricative there needs to be friction. The uvula is the dangly thing in front of the tonsils at the back of the throat. 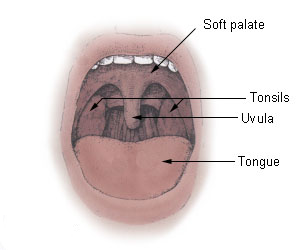 So the friction we need to achieve is between the back of the tongue and the uvula. Listen to the voice recording below to get an idea and try to reproduce it.

Once you’ve found new sounds – and you remember to use them! – your pronunciation will immediately improve. You may find it tiring on the mouth to begin with. This is because you are exercising muscles you don’t usually use. Keep at it and you’ll be speaking French like Peter Sellers.