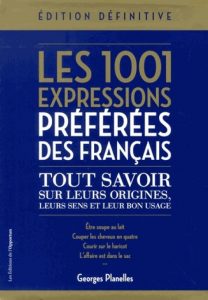 The party has become raucous, the verbal jousting has begun.

« Il est con comme un balai » one guest shouts and the others burst out laughing.

All languages are packed with idiomatic expressions. As a learner, their meaning can be obscure and the choice of imagery is rarely obvious. But picking them up is the fastest way to getting admiring glances on how good your French is – and it’s also one of the most enjoyable parts of language learning.

The bible in the field is Les 1001 Expressions Préférées Des Français, which Georges Planelles has spent more than a decade compiling. His project began as the website Expressio – which is still freely available. For each expression he gives the meaning, examples and origins. The informal style makes it easy to read and there’s more than 1000 pages packed with information.

You can quickly build up your stock with expressions that are identical in French and in English. Often they have biblical or classical origins. For example « Verser des larmes de crocodile » – to shed crocodile tears – exists in Latin and Greek.

Direct equivalents are less frequent in more recent idioms. « Poser un lapin » – to stand someone up – was first coined in the 19th century. (See also this dictation exercise). « Poser » used to mean “to make someone wait” and « le lapin » was argot for money. But there’s no documentary evidence to show this became transformed into “not turning up for a date” and it’s possible the real origin has been lost in the mists of time.

Appearances can be deceptive. If you’re weighing up two different options and there’s nothing to choose between them – for example two routes home – you can say « C’est kif-kif ». « Du kif » is French slang for cannabis, but in this case the expression comes the from the arabic word “kif” meaning “like (as in similar to)”.

There are cases where French and English use different images to express the same thought. In English we say “That’s double Dutch to me” to indicate something we don’t understand (unless, that is, we’re talking about the skipping game of Malcolm McLaren fame). The French equivalent is « C’est de l’hébreu! »

The choice of image can sometimes seem arbitrary. Even so, you often have to reproduce the idiom exactly as it has passed into popular usage for it to work. But there are also more open-ended similes. « Rond comme… » means to be drunk and with this one you can just use your imagination and add on pretty much anything you like which is round: « Rond comme une balle, une boule, une pomme, une barrique… »

And then there’s the tricky area where English and French have similar expressions but the nuances are different. « Il est con comme un balai » is superficially similar to “He’s as daft as a brush / daft as a broomstick”. But the English version is quite childish whereas the French version is much more bawdy (the origins are sexual). “Thick as two short planks” (or “thick as shit”) are maybe closer, but even they’re not quite right, because the English lacks the humourous tone of the French. Sometimes a perfect equivalent simply doesn’t exist.

For most of us, memorising expressions requires mental effort – they don’t stick just like that. For those who like digital solutions, Quizlet is an excellent tool for building flashcards. But pen and paper works just as well. Listening out for idioms and using them is the best way of transferring your knowledge to your active long term memory.

Les 1001 Expressions Préférées Des Français has become a bestseller. If you’re looking for a present for yourself, or a French language lover that you know, it’s well worth checking out.